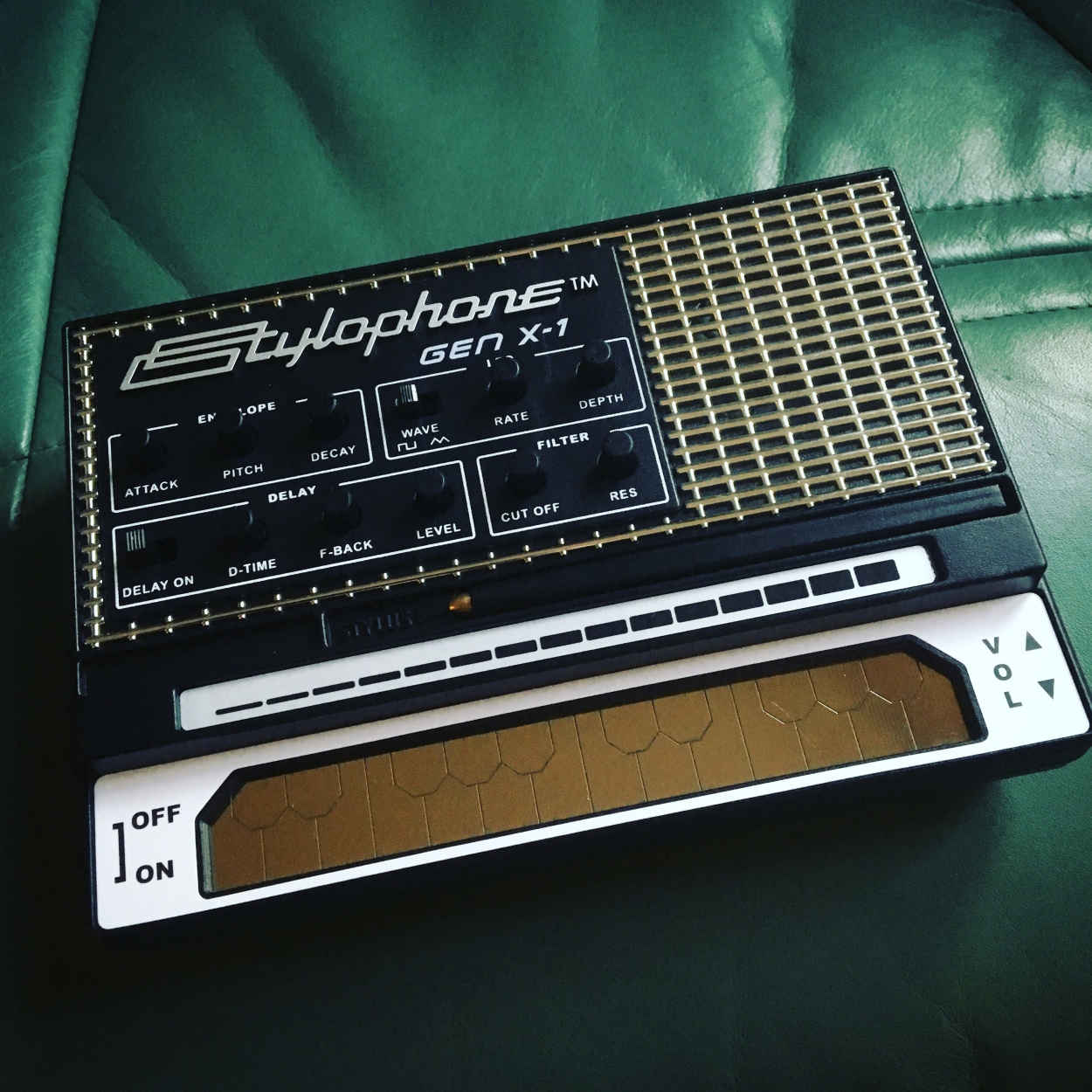 At the outset, in the interests of full disclosure: I confess to being a long-time Stylophone fan.

I received my first Stylophone for my 6th birthday in 197(mumblemumble), and picked up another one from a jumble-sale in (I seem to recall) the early-90s. It appears I was not the only “fan” from those days, as Dubreq, the company which debuted the Stylophone in 1968, relaunched in the mid-2000s with an updated version of the original. This was soon followed by a “percussion sounds” version (the Stylophone Beatbox—I acquired one around Christmas a few years ago, and now think it’s about time we got re-acquainted), and a “proper” synthesiser, the Stylophone S2, in 2012. (Yes, I wouldn’t mind owning one of the latter, if I ever got a good enough excuse!)

Someone at Dubreq must have thought it would be nice to have a “synthified Stylophone” at a keener price-point than the S2—desirable as it is, the flagship would leave one with very little change from £300. Therefore, in 2017, the company launched the Gen X-1—ostensibly, a Stylophone with analogue-synth features, and a highly-attractive price of £59.99.

At first glance, the Gen X-1 looks like what (on the face of it, at least) it is: a souped-up version of its hallowed ancestor. It’s noticeably larger—mostly to accommodate the array of controls for adjusting the new filter, LFO and delay sections—but not quite on the scale of the 350S, the “super-Stylophone” of the 70s (which I’d still rather like to own—see a pattern here yet…?).

Turn the Gen X-1 over, and you will find the battery hatch secured by a screw (the instrument requires four AA batteries, instead of the 9V cell of the original), as well as the master tuning control, which I will return to shortly.

The metal contact-strip “keyboard” and stylus have been retained from previous Stylophone instruments, whilst a new addition is a “touch strip” (basically, a small ribbon controller) for non-pitched control of the oscillator pitch. In the case of the former, I would have liked a more robust solution for the hair-thin cable connecting the stylus to the instrument—just like the original Stylophone—as I feel certain this is going to fail at some stage, no matter how careful I am with it. I also found that the tip of the stylus needed a quick “buff” at the start, as the first notes I played on the metal keyboard-strip exhibited the infamous “ee-eee-eerrk” effect of a Stylophone with an intermittent circuit. Hopefully the keyboard will not need as much cleaning as the original, but it’s good to be aware of this issue.

The “touch strip” is an interesting addition, and is potentially most useful for generating electronic “swoops” and other sound-effects that don’t need actual note-pitches. In common with other reviewers, I found it a bit fiddly to use: the strip lies in a “recess” next to the stylus “slot”, and it’s a bit difficult to get a finger down onto the strip, which is quite thin and deep into the recess. Moreover, the strip needs a fair amount of a bit of pressure to make it sound, and if the pressure is not maintained, the note cuts out. You can use the stylus or other implement to press the strip; however, I am a bit concerned that dragging a stylus quite hard across the strip could wear out or break its surface over time. Let’s see.

The new additions to this next-gen Stylophone, shouldn’t faze those familiar with “traditional” analogue synthesisers, although a few features may not be found where one might expect them. The three latching buttons on the left-hand edge of the Gen X-1, for example, switch in a sub-octave, a sub-sub octave and pulse width modulation to the basic oscillator tone. The former two make it possible to generate some surprisingly meaty bass-synth patches (especially with the PWM activated to fatten up the tone). I would’ve liked the option to mute the main oscillator so you only hear the sub-octaves, but as I suspect the latter are “divided down” from the former, that would mean there’d be nothing to generate the sub-octaves from, so I can live with the current arrangement.

(Shortly before I published this review, I found an unexpected “workround” to this pitch issue: the oscillator-tuning control on the base of the Gen X-1, has a range of over two octaves. This means that you can lower the pitch of the oscillator by an octave either way—meaning that you can dial in a synth-bass without the unwanted higher pitch (and add the sub- and/or sub-sub-octave if desired), or an octave-higher lead patch. Yes, perhaps it would be nice to have an option to silence the “fundamental” pitch, but I find the tuning-control a workable and acceptable alternative.)

The Gen X-1’s filter section, whilst perhaps not quite offering all the sound of (say) a Moog filter, is a very welcome addition, and surprisingly decent-sounding for a synth at such a low price point. There are controls for cutoff frequency, resonance (yes, it’s a resonant filter, and can even be coaxed into self-oscillation at a pinch) and a dedicated envelope section for shaping the filter’s response. The LFO function offers square- and triangle-waveforms, rate and depth, and the latter two controls also configure the parameters of the PWM switch.

If all this isn’t “enough”, there’s also a delay section. which is especially “fun” when manipulated in real time (again, a degree of self-oscillation is possible with skilful use of the feedback control). In other words, for such a relatively affordable synth, the Gen X-1 offers a remarkable array of tone-shaping options, to the point where I found it actually takes some thought to recreate the “classic” Stylophone sound!

One observation I have, is that the many similarities (stylus, keyboard, etc.) between the Gen X-1 and the original Stylophone, may give new users the impression that the former is basically the latter with a couple of additions.

I’m not so sure of this myself. After the first couple of hours of use, I felt the Gen X-1 seems more like one of the 70s British monophonic synths (say, an EMS VCS3 or a Wasp), which happens to have a Stylophone-like control interface. This is partly down to the kind of noises one can produce with the Gen X-1, but mainly (for me) because tuning and calibrating this synth can be a little more complicated than you might expect from a machine that looks like a Stylophone.

The issue is that tuning the Gen X-1 is not simply a case of tweaking the “master tuner” spindle on the underside of the unit, until “middle-C” sounds at the correct pitch. You also have to locate the “keyboard-scaler” control—a dial with a slot for a small screwdriver, recessed into the back of the synth (not the “top”, as the manual misleadingly puts it)—and turn this until “middle-C” and the C an octave below on the keyboard, both sound as close to their nominal notes as possible. Frankly, I found this about as easy as herding cats—I would get middle-C in tune, then find that low-C was some way “off”, and adjust the scaling control, which then put middle-C back “out” again, and so on.

After a few minutes of back-and-forth with both tuning controls, I managed to get both “keys” at least tolerably close to their respective notes. I was uncertain whether it is even possible to “scale” the entire keyboard to pitch-perfection, but I live in hope… suffice it to say, getting the Gen X-1 tuned to play pitch-perfect “melodically”, seems uncannily reminiscent of synths like the VCS3! However, I believe it is possible with practice, and at least the Gen X-1 seems to stay in tune quite well once you get it there, for which I am grateful.

As with many analogue synthesisers—especially from the 60s and 70s—the Gen X-1 has an auxiliary input, meaning that the synth can process any signal fed into the input jack, through its filter, LFO and delay circuits. I haven’t yet tried this, but I am keen to have a go at putting an electric guitar or drum-machine through the Gen X-1, and find out what I can do with that setup. A great idea, especially at such a low price-point.

One other thing to be aware of, especially for those (like me, basically!) thinking this machine would be great to record with: well, it is, but bear in mind that this is a pure analogue synth (no digital virtual-analogue here), and perhaps as a result, the output of the Gen X-1 is a bit noisy/hissy, especially via the output jack. Sadly, turning up the volume control doesn’t increase the signal/noise ratio, but also raises the noise with the output you actually want.

Fortunately, the noise is pretty consistent in nature, meaning that a decent noise-cancelling software plugin (personal favourite: Klevgrand’s fantastic Brusfri, available as both a Mac or Windows plugin and an iOS app) can clean up the signal quite nicely, either at the recording or mixing stage.

As I wrote above, in my view the Stylophone Gen X-1 is not so much a Stylophone with added synth features, as a modern and miniaturised attempt at a 70s-style British analogue monosynth, in the body of a souped-up Stylophone. It pays to be aware of the machine’s “quirks”—sometimes fiddly tuning arrangements, a slightly hissy output (though nothing that a decent noise-removal plugin can’t fix with ease) and an occasional tendency to be a bit temperamental in operation—and at the risk of sounding churlish, some means of supplying external power via mains or USB wouldn’t hurt.

However, none of this changes my view that the Stylophone Gen X-1 is highly portable, amazingly versatile (both as an analogue synth and a signal-processing device), great fun to experiment with, and perhaps best of all, ridiculously cheap for an analogue synthesiser. I’m already recording with the Gen X-1, and you can expect to hear it on a future project of mine or two.

T.A. Walker (or "Tim" to those who know him) is a UK-based English guitarist/multi-instrumentalist, recording musician, composer, songwriter and Web worker. He also produces 60s/psych-tinged guitar-pop with whimsical English-type leanings, under the moniker The Pattern Store. Busy fellow.